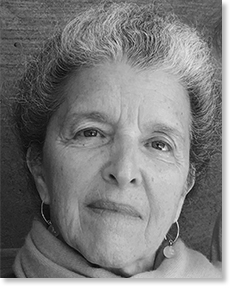 Janet Adler, Founder of the Discipline of Authentic Movement, was introduced to movement as a manifestation of the unconscious by Marian Chace, to authentic movement becoming conscious by Mary Whitehouse, and to somatic epistemology by John Weir. She has explored authentic movement in the presence of a witness since 1969, discovering an inherent order within the development of mover consciousness, witness consciousness, and the relationship between the two. The inner witness, the thread of connection between and among these phenomena, is the core of her enduring inquiry into the study and practice of the discipline, of the evolution of embodied consciousness.

Founder of Circles of Four in 2013 and continuing member of the faculty, Janet remains actively engaged in a mentorship role within the program as it develops. but no longer teaches in the circles of learners. She continues with her writing practice and her participation as a grief counsellor and interfaith chaplain at Transitions in Dying and Grieving, a volunteer hospice program which she co-created and directed since 2007 on Galiano Island, BC, Canada.

As guest teacher and senior faculty, she has widely offered lectures, seminars, and retreats concerning the development of the Discipline of Authentic Movement in private
and public institutions, retreat centers, universities, and clinics in North America and abroad since 1970.

Janet’s teaching practice in Northern California (1986-2006) included welcoming individuals and groups into advanced study of theory and practice of the discipline. She offered groups focusing on the relationship between the Discipline of Authentic Movement and the distinct realms of: mystical text, mystical dance, kundalini, the process of initiation, Jewish Mysticism, Zen, and the practice of psychotherapy. These years also included producing and directing “Still Looking”, a film about her work at that time in the Discipline of Authentic Movement (1998). www.expressivemedia.org During this time period, she engaged in hospice work in Santa Rosa, California, as a volunteer caregiver (1988-1999) and then as an interfaith chaplain (1999-2005).

Her teaching practice in Northampton, Massachusetts (1971-1987) included her work as Founder and Director of the Mary Starks Whitehouse Institute, the first school devoted to the study and practice of Authentic Movement. She also taught authentic movement to dancers and choreographers in the Dance Gallery Performing Arts Company. In 2019 she returned to Northampton to be honored for 50 years of devoted work within the field of somatics. www.somatics2019.

Janet’s experience as a board-certified dance/movement therapist (1963- 1973) included work in differential diagnosis in the nursery at Gallaudet College, the first college for deaf students, in Washington, DC, work with psychotic young adults at Austin Riggs Center, directed by Erik and Joan Erikson in Stockbridge MA, and work with autistic children at the Western Psychiatric Institute and Clinic at the University of Pittsburgh. Phenomenological research with the autistic children is documented in her film “Looking for Me” (1968). www.expressivemedia.org

Janet is the author of Offering from the Conscious Body: The Discipline of Authentic Movement (2002) which is translated into Italian, German, Chinese, French, Russian, and Polish. She is the author of Arching Backward: The Mystical Initiation of a Contemporary Woman (1995). Her essays and interviews (1972-2004), some translated into other languages, are published in Authentic Movement: Essays by Mary Starks Whitehouse, Janet Adler, and Joan Chodorow: Volume One (1999) and Authentic Movement: Moving the Body, Moving the Self, Being Moved: A Collection of Essays: Volume Two (2007), both edited by Patrizia Pallaro. Essays, interviews, and book reviews are published in the following journals: Parabola, A Moving Journal, Contact
Quarterly, Journal for Authentic Movement and Somatic Inquiry, The American Journal of Dance Therapy, and in the book Therapy in Motion, edited by Maureen Needham Costonis (1978).

Janet holds a Doctorate in Mysticism from the Union Institute (1992). Her archives will be housed at the New York Public Library for the Performing Arts. www.nypl.org