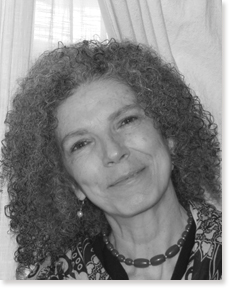 Eleni Levidi encountered her inner teacher at a young age and developed her own personal movement practice in the 1980s. Its core was two-fold: differentiating habitual impulses from movement felt as truth, and bringing present moment awareness to inner states and synchronicities. This practice informed her pioneering dance therapy work in Greece in that decade.

Eleni’s first external witness in the discipline was Marsha Kalina in 1993. Recognizing this work as akin to her inner lineage, Eleni committed to in-depth learning, with Marsha until 1996, then at the Authentic Movement Institute in California with Neala Haze and Tina Stromsted (1996-1998). After meeting Janet Adler in 1996, Eleni worked intensively with her individually, in small groups, and in retreats focusing on Mystical Dance. Eleni assisted Janet in her teachers’ retreats in Italy (1998-1999) and Greece (2000).

Eleni started teaching the Discipline of Authentic Movement in 1995 in Greece, London, California, and Colorado. Since 1997 she has integrated this work in her private practice of psychotherapy, process for artists, and consultation to advanced practitioners and clinicians.

In her native Greece, she founded Θεμέλιον (Foundation Stone) in 2003, a training program in the Discipline of Authentic Movement. She has taught this discipline for the Greek Dance Therapy Association’s graduate program (since 2001) and at Naropa University (2000-2006).

As teacher of the Discipline of Authentic Movement, Eleni offers individual, partner, and group practice, training, personal and group retreats, workshops, and supervision (in person, via Skype, or by phone). She presents internationally at universities, Jungian societies and conferences, research events, dance centers, and dance therapy chapters. For Eleni, the Discipline of Authentic Movement is a Feminine Mystery practice with ancient roots; the practice guides her life, as she heeds the wisdom welling up from the somatic unconscious.

Eleni’s current research and writing focus on the psychological significance and healing function of archetypal gestures and on how energic (Greek, ενεργειακές) experiences shape movement. Her volunteer service includes grief and hospice work, community revitalization projects, and nonprofit board memberships. She is a Jungian analyst in training (IRSJA) and a Certified Master Dream Pattern Analyst.

Eleni Levidi, MS, LPC, BC-DMT, received her Master’s in Dance Therapy from CUNY and her BA in Psychology and Dance from the American College of Greece. She studied at the C. G. Jung Institute of Colorado and the Assisi Institute in Mystic, CT USA. She has held certifications in geriatric consultation, developmental disabilities, and group psychotherapy.