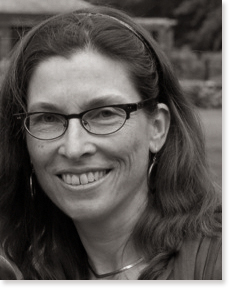 Paula Sager, as a dancer and choreographer, came to embodied awareness and somatic inquiry through her studies and training with Aileen Crow (1984-89). Her practice of the Discipline of Authentic Movement began in 1990 in a group led by Diana Levy. The group was a creative wellspring for numerous endeavors including A Moving Journal, an international publication devoted to Authentic Movement and the diverse perspectives, questions, and offerings of its practitioners. Paula, Joan Webb, and Annie Geissinger co-edited AMJ from 1994 to  2006.

Paula began studying with Janet Adler in 1994, as a member of one of the East Coast collectives at Stump Sprouts. Since then Paula’s work with Janet and fellow students of the Discipline of Authentic Movement has informed and infused her life with nourishment and guidance.

In her teaching of the Discipline, Paula offers individual sessions and solo retreats as well as group retreats at her studio located in rural Rhode Island. She also teaches at Voice Body Mind Healing Collaborative in Providence, RI and leads retreats and on-going groups in a variety of settings, including New York City. As a Circles of Four faculty member, she is available as a primary teacher and retreat teacher.

Paula brings her experience as a somatic educator, her long-time study of Rudolf Steiner and Anthroposophy, and her passion for supporting the development of witness consciousness to her work with individuals, groups and organizations, which have included the Center for Contemplative Mind in Society and the Mariposa Center, a social justice initiative focused on early childhood education.

Paula Sager, BA, MLS, has a degree in Dance from Bennington College and a graduate degree from the Barfield School at Sunbridge College, where her research with thesis mentors, Janet Adler and Arthur Zajonc focused on the development of the inner witness. Her thesis, Witness Consciousness in the Development of the Individual, can be found on her website. She studied the Alexander Technique with Eva Karczag and Aileen Crow, becoming certified as an Alexander teacher in 1989.

Paula’s articles and interviews have appeared in A Moving Journal, Contact Quarterly, Journal for Authentic Movement and Somatic Inquiry, and Journal of Dance and Somatic Practices. She has presented at American Dance Therapy and Body-Mind Centering conferences. She is co-author with Lizbeth Hamlin of Red Thread, Two Women, a long-distance experiment in moving, witnessing, and word.