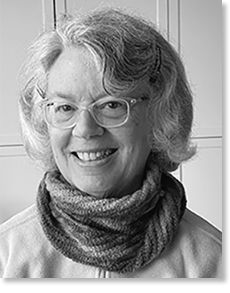 Joan Webb began studying Authentic Movement in 1990, with Diana Levy. In 1992-93 she completed a year-long teacher training with Zoe Avstreih. Joan began to participate in annual 5-day group retreats with Janet Adler in 1995. One of these groups studied the relationship between the Discipline of Authentic Movement and Jewish mysticism; that group continues to meet annually as a peer group. Since 1993, Joan has been teaching the Discipline of Authentic Movement to groups and individuals in her barn studio in Seekonk, Massachusetts, just outside Providence, Rhode Island.

Joan was a founding co-editor of A Moving Journal, an international publication devoted to writings and art relating to Authentic Movement, during its thirteen years of publication (1994-2006). Editing and laying out the many writings and drawings from all over the world gave Joan an in-depth understanding of the power of Authentic Movement and the many ways it transforms lives. Joan was pleased and privileged to be a part of the growing worldwide community that A Moving Journal grew out of and helped to sustain.

Joan began a daily yoga practice in 1987, received a teaching certificate from the Kripalu Center in 1992, and has been teaching yoga since then. Her interest in Jewish mysticism led her to study Kabbalah with Jason Shulman and to complete a four-year training in Integrated Kabbalistic Healing in 2007. She continues advanced studies, including Impersonal Movement and the MAGI process for conflict resolution, with the Society of Souls. This training gives Joan experience and tools for working with personal and inter-personal psychological issues and with the processes of healing and personal growth. Both the Society of Souls and the Discipline of Authentic Movement recognize the centrality of being in the body, non-duality, relationship, and transference.

Joan Webb received a Bachelor of Arts degree in mathematics from Oberlin College and a master’s degree in curriculum and instruction from the University of Wisconsin.

At her website, you will find a link to her introductory pamphlet, “Welcome to the World of Authentic Movement.”