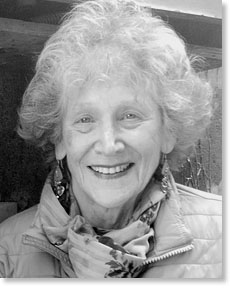 Marcia Plevin, an American from Brooklyn, has lived and worked in Italy since 1986. She began studying with Janet Adler when Janet first taught retreats in Europe in 1991. Marcia also enriched her knowledge and practice of Authentic Movement through her studies with Joan Chodorow and Tina Stromsted in the 1990s.

In 1973 while performing “Shirah,” a dance choreographed by Pearl Lang, on a New York City concert stage, Marcia encountered what she understands now was a mystical experience. She has searched ever since to uncover the mystery of “what had happened.” In the Discipline of Authentic Movement, she has found a place where that question can possibly be answered. Today that practice keeps her in touch with the Eastern spiritual tradition’s “beginner’s mind,” which encourages and honors recognition of not-knowing and being present to what simply is.

Marcia has been teaching Authentic Movement to individuals and groups since 1995. During the 1990s she was both a Dance Movement Therapist and a contemporary dance teacher at the Accademia Nazionale di Danza in Rome. She taught Authentic Movement to groups in Italy, Finland, Spain, and Turkey, and she is currently introducing the practice in China through the Inspirees Institute. In 1997 she guided members of the first Finnish Authentic Movement circle to form a peer group, which still exists today. She introduced Authentic Movement in Claudio Naranjo’s program in Spain in the middle 1990s and brought Authentic Movement practice to Turkey in 2005 through Bilgi University, Istanbul. Within the Creative Movement- method Garcia-Plevin® training programs in Italy and China, Authentic Movement is taught as a creative process and a mover/witness resource. Marcia holds an international retreat in northern Italy every summer, bringing together experienced practitioners of the Discipline from various countries. She offers individual, group, and supervision work from her studio in Rovereto, Italy.

Marcia holds a BS degree from the University of Wisconsin, Madison in dance and a post-graduate art psychotherapist diploma from Goldsmith College, London. She is a Dance Movement Therapist-BC-DMT clinician and supervisor for the Expressive Psychotherapy Institute, Art Therapy Italiana, Bologna and for the Inspirees Institute in Beijing. She has studied Vipassana Meditation with Corrado Penza in Rome. Her articles on Authentic Movement have appeared in A Moving Journal, Contact Quarterly, Authentic Movement Vol. II, ed. Patrizia Pallaro, and The Handbook of Dance and Wellbeing, ed. Vicky Karkou, Sue Oliver, Sophia Lycouris.