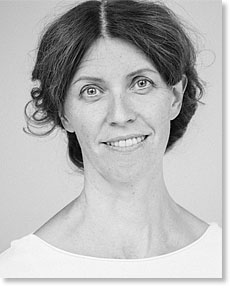 Nina Kungurova first experienced Authentic Movement in her Dance Movement Therapy training in 2004. She continued her study in the long-term groups led by Russian practitioners Alexander Girshon and Irina Biryukova. In 2011, following her longing to deepen her practice, Nina met and studied with Linda Hartley and Cornelia Schmitz, and also began attending annual retreats with Janet Adler. Nina’s strong commitment and devotion to the Discipline of Authentic Movement have led her to complete the five-year Internship Program with Janet on Galiano Island and, in 2017, the Circles of Four program. In 2021 Nina became a faculty member of Circles of Four.

Nina offers individual sessions, dyadic, and group work in the Discipline of Authentic Movement in weekend seminars, year-long groups, and annual retreats. She introduces the discipline as an embodied practice of conscious awareness in various cities in Russia as well as in Belarus, Ukraine, and Estonia.

Nina is a Somatic Movement Therapist (RSMT), registered by International Somatic Movement Education and Therapy Association, and has a diploma in Integrative Bodywork and Movement Therapy. Passionate about the relationship between the personal and transpersonal, energetic phenomena, and traumatic material held within the body, Nina has completed her post-graduate studies in Working with Shock Trauma, Developmental Trauma and Chronic Body Symptoms, Psychotherapy for Psychosomatic Disorders, Process Oriented Psychology, and in Working with Transgenerational and Embryological Developmental Trauma in an Analytic Approach. She teaches Authentic Movement at the Institute for Integrative Bodywork and Movement Therapy, at the professional post-graduate program of Art Therapy, and at the International Embodied Facilitator Course Russia.

Originally receiving her university degree as a philologist, Nina uses her love of language to translate resources on Authentic Movement into Russian. She has facilitated the translation of twenty articles, including “The Mandorla and the Discipline of Authentic Movement” by Janet Adler. Nina supports the development of the community of Authentic Movement in Russia by organizing events, lectures, and retreats with foreign teachers. In 2011, she created a short film “I Close My Eyes.” Starting in 2015, on Mary Whitehouse’s birthday, Nina has been facilitating the International Authentic Movement Day, with Russian-speaking groups of practitioners in over 30 cities participating.